My Personal Journey To The Roman Catholic Church 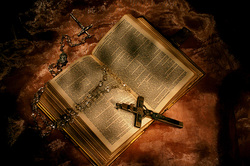 I am not a "Cradle Catholic"  I am what is commonly referred to as a "Catholic Convert".  I grew up exposed to the Church of Christ, attending periodically with my Grandmother.  She was a very devout Christian, attending church several times a week.  I would not attend often, but when I did I was exposed to the beliefs and traditions that my Grandmother held so dear.  From her influence, I had the understanding that the Church of Christ was the one true Church, and if I was ever to live in a life of Christ it needed to be as a member of this Church which stresses that the King James Version translation of the Bible is the path to Heaven.  The Church that she was a member of held the services in the converted garage of the Pastor.  All of the songs were sung without the accompaniment of musical instruments.  Communion was practiced by passing around a "Communion Tray" that contained small individual plastic cups filled with grape juice.  Baptism was only performed on an adult.  Dancing, drinking alcohol, and gambling were all considered serious sins against God.

During Middle School and High School, I started to have many Roman Catholic friends.  These Catholics had all attended grade school together.  In our town the Catholic school system ended in 6th grade.   Beginning with 7th grade these Catholics transitioned into the public school system.  With these new friends I was exposed to many of their beliefs and traditions that differed greatly from that of the Church of Christ.

In 1988 I met my future wife, a "Cradle Catholic".  Her Catholic beliefs and traditions are something she holds very important in her life.  Shortly after we were engaged I took her to visit my Grandmother.  During our visit my Grandmother told my fiance, "I understand you are Catholic.  You are going to Hell, and now you will be dragging my Grandson to Hell with you".  Of course this bothered us both, but what could I say?   I loved my Grandmother and I didn't believe she intended to hurt us.  It was her way of doing what she felt was right for her Grandson.

In 1990 I married my wife in a Roman Catholic Church.  At the time I was not a Catholic.   I was also not a member of any other church or denomination.  Therefor, I felt it was OK to get married in the Catholic Church.  At that time in my life I believed in God, but that was really about the extent of it.  We went through the required Pre-Cana classes during our engagement.  As a prerequisite of getting married in the Church, I agreed to never interfere with my wife's practice of her faith.  I also agreed that we would raise our future children as Catholics.

After we were married, I always attended Mass with my wife.  To my wife's credit, she never once asked me to consider becoming a Catholic.  In 1992 she decided she would like go through the Rite Of Confirmation.  This normally occurs in 8th, 9th, or 10th grade.  However, she had never been Confirmed because she had moved the year it was scheduled to happen.  Confirmation classes as an adult are achieved by attending R.C.I.A. classes (Rite of Christian Initiation for Adults).  R.C.I.A. is also the path for adults to take if they are considering becoming  Roman Catholic.  I decided to attend the classes with her.  I wanted to do this to not only support her, but also to learn more about the Church.  As I attended classes I kept an open mind and let the chips fall where they may.

Religion can be challenging for a person who tends to over analyze most things.  I am an Engineer and I spend my life rarely accepting something on faith alone.  I will research, study, and challenge results before I am ready to accept them.  This is the same approach I took when deciding if I wanted to become a Roman Catholic.  I had many questions that I wanted to consider:

Why join the Catholic Church when there are so many Christian Churches to choose from?
What makes Catholism the right choice for me?
Why are Catholic Traditions so important in understanding the Bible?  My Grandmother had taught me that if you study the Bible, God will help you to understand its meaning.
What about all the bad things that has occurred during the history of the Catholic Church?
Why is it OK for Catholics to drink alcohol?
Do Catholics worship Mary and if they don't, why is she held in such high honor?
Does the bread and wine really change to the body and blood of Jesus?  How could someone actually believe this when it is so obvious that nothing changes in appearance during the Transubstantiation?

These are only a sampling of the questions that were bouncing around in my head.  I must have drove my wife absolutely crazy.  She is a faith based Catholic.  Bless her for that.  She believes, and rarely questions any part of the Catholic Teachings or Traditions.  I on the other hand studied many Catholic Apologetics in my search for answers.  Some of these were the writings of  Scott Hahn and Karl Keating.  These greatly helped in the formation of my understanding of the history, traditions, and beliefs of the Catholic Church.  Finally, in 1993, I decided that I wanted to become a Catholic.  That spring I had the grand slam of Sacraments:  Baptism,  First Communion, and  Confirmation.